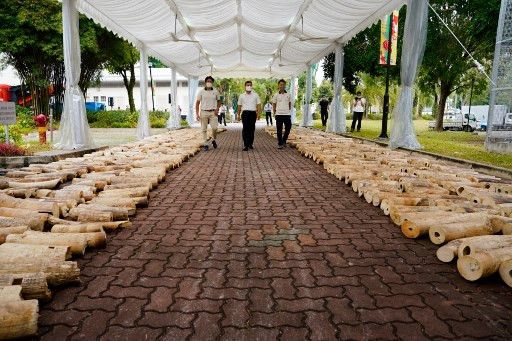 The destruction by an industrial rock crusher was held on the eve of World Elephant Day, and aims to prevent the items from re-entering the market and disrupt the global supply chain of illegally traded ivory, Singapore’s National Parks Board said.

A spokeswoman for the board told AFP it would take three to five days for all of the ivory — seized between 2014 and 2019 — to be crushed, after which the fragments will be incinerated.

“This ivory crushing event, the largest globally in recent years, demonstrates Singapore’s strong determination and commitment to combat the illegal trade in wildlife,” the board said in a statement.

The items include 8.8 tons of ivory seized last year in Singapore’s biggest haul worth Sg$17.6 million (US$13 million), it said.

Singapore also Tuesday launched a Centre for Wildlife Forensics to “identify and analyze specimens involved in the illegal wildlife trade”.

By using DNA analysis and other methods to study the specimens, the center can determine where the items were poached from — a useful tool in the fight against illegal wildlife trade.